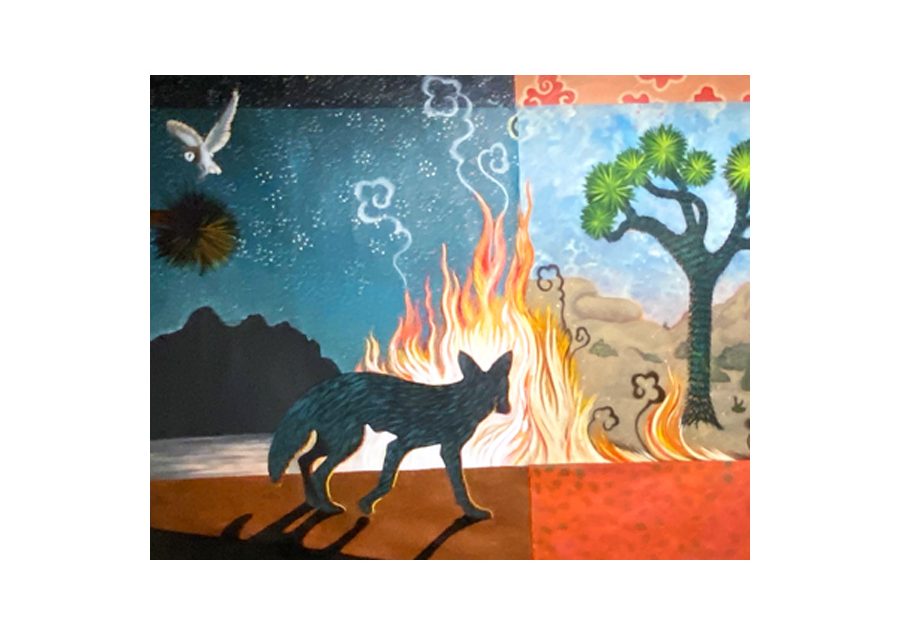 On Saturday, August 15, 2020, a fire was spotted in the Joshua Tree woodland of Cima Dome in the Mojave Desert. The blaze was sparked by dry lightning at a time when about 370 other fires, many of which were also sparked by lightning, were burning in California. Although calls for resources such as aircraft, helicopters, extra crews, and retardant drops were issued, firefighting teams and equipment were stretched thin across the state. This unusual series of dry lightning storms, combined with a climate change-driven statewide heatwave, created what would soon become an environmental disaster.

By Sunday, August 16, the Mojave fire, now known as the “Dome Fire” had grown to 16,000 acres. The heat and flames had become so intense they began to create their own winds and “firenadoes” which spread the conflagration even farther. It burned unchecked until late Monday, August 17, when fire crews began to get it contained.

The taxonomic name for the Joshua Tree is Yucca Brevifolia. The common name has been attributed to Mormon settlers migrating across the Mojave Desert in the 19th century. The trees start from seeds and grow about 3.5 inches per year in their first 10 years. After that, their growth slows to about 1.5 inches per year. Some Joshua Trees can live to be hundreds, or even thousands, of years old and can reach heights of about 50′.

Joshua Trees are only found only in high-desert elevations, between 1,300- 5,900 feet, in the Southwestern United States. Due to their narrow habitat range, Joshua Trees are already threatened by a rapidly changing climate.

When the last embers of the Dome Fire were extinguished, 43, 273 acres of Mojave Desert woodlands had been destroyed, including countless cactuses, bushes, shrubs, and grasses which were home and habitat for numerous species of animals. 1.3 million Joshua Trees, estimated to be 25% of the contiguous Joshua Tree forest, also suffered fatal damage.

To remember the Joshua Tree forest that perished in this fire, and to raise awareness about the impacts of climate change, I created this mural, “Desert Fire.” It is 16.5′ long by 5′ tall. Acrylic on mural fabric. It hangs with grommets, or it can be permanently affixed to a wall.

15% of the sell price will go to the Mojave National Preserve’s Joshua Tree seedling program to replant portions of the Dome Fire burn area.

Shipping is included in purchase price, or local (LA Area) delivery. Contact me for details.